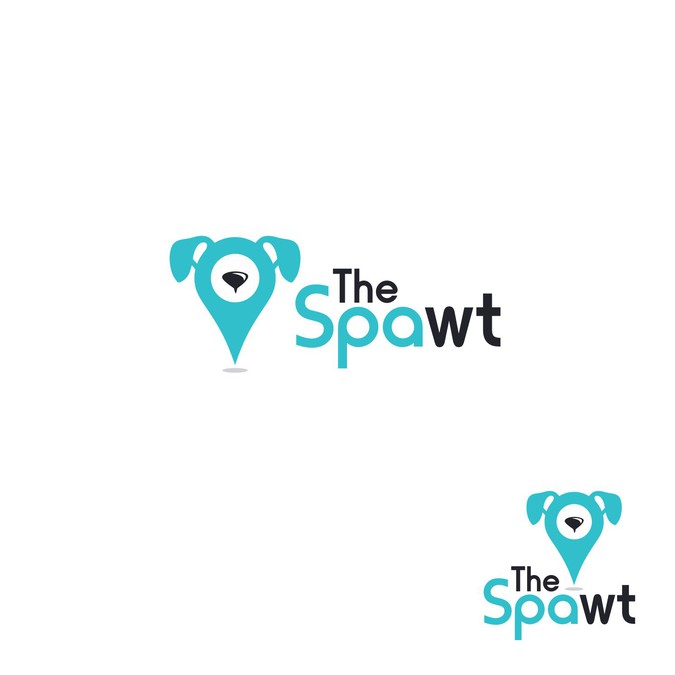 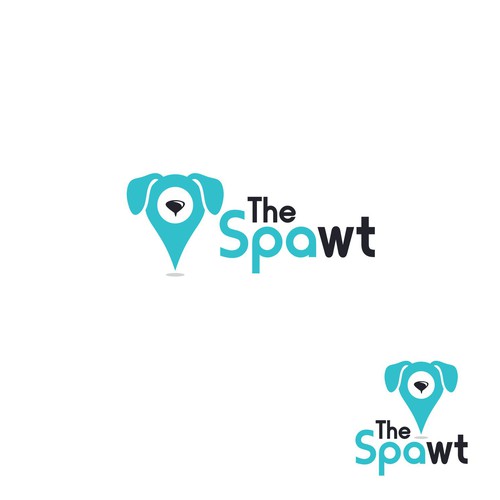 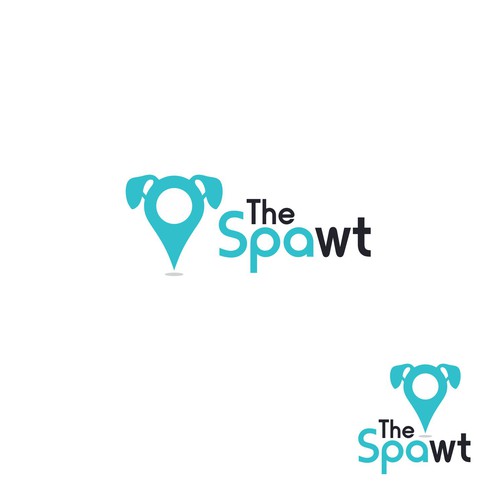 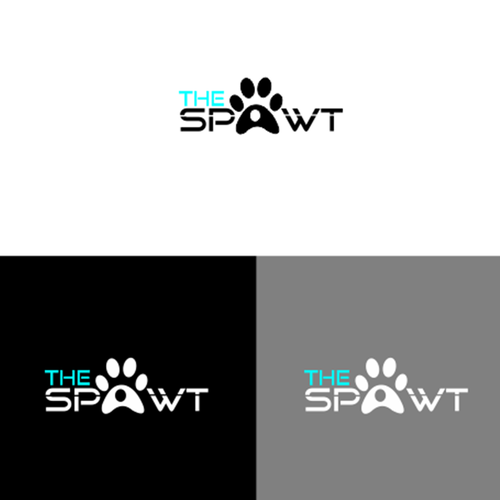 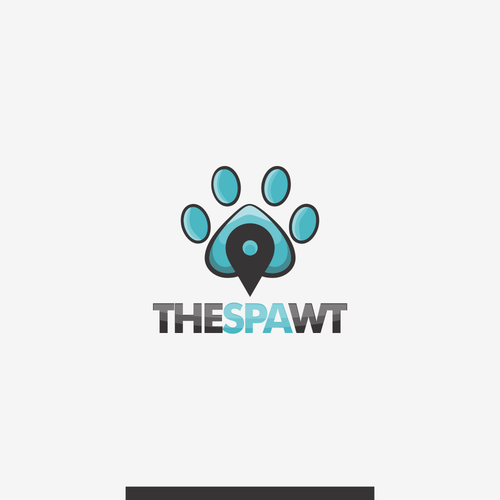 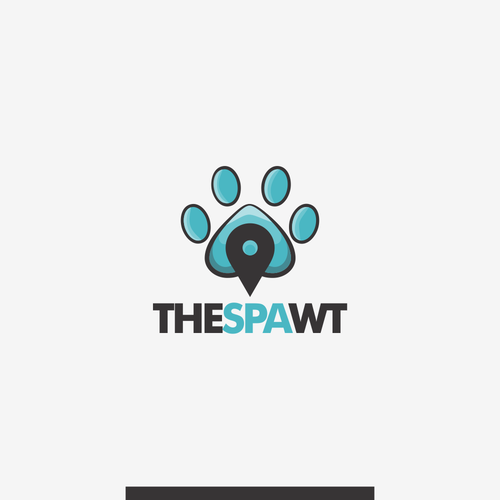 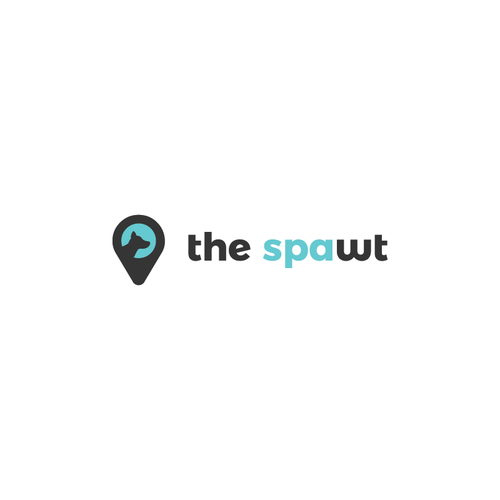 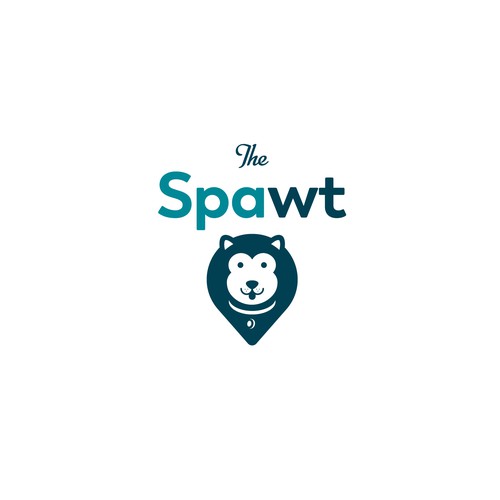 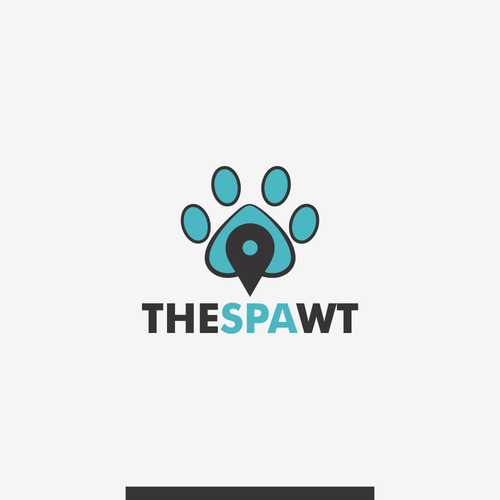 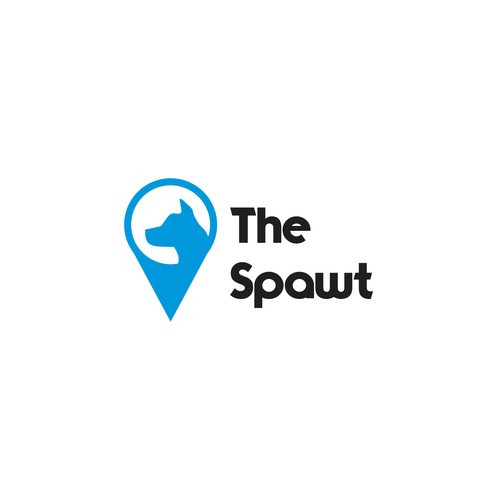 We are a modern, dog-oriented product and service business providing retail, self-wash, and grooming services

Our company name "The Spawt" has multiple meanings. First, "The Spawt" as in "the spot" signifies that this is the place to be. Secondly, we are a dog bath and grooming company so the word "Spa" is incorporated and we would like to emphasize it within the logo by making the "spa" in aqua color and the rest of "The wt" in black. Third, "paw" is in the middle of the word; however, it does not need emphasized, unless you can come up with something clever.

We would like "The Spawt" to have a modern and simple but friendly font. The words itself just need to be aqua (Spa) and black (The wt) as said above. Do not incorporate any other design into the words.

As for our non-word part of the logo, we would like to combine a dogs face or paw within a location pin (as attached). We want the logo to be very simple and modern, and to only incorporate colors black and aqua. The inclusion of the location pin as "the spot".

I have also attached a logo used by another company that oddly has our same name. I like their idea but don't want to copy - think a dog head/face may be better within the logo.

I have also attached a similar style I would like for the face or paw. Simple outline with minimal to no shading preffered.

Additional Idea - Would like to see a plain location pin with just ears out of the top of the pin. See provided "Paw by Paw" picture for an idea of the ears I would like.

Logo für unsere kleine familiäre Britisch Kurzhaar Katzen Zucht gesucht
269 €
Wir sind eine kleine familiäre Zucht der Rasse Britisch Kurz Haar. Wir züchten im kleine Rahmen mit 4 potenten Tieren
71
entries
28
Designer
Design a logo for a Maine Coon cat breeder
CAD 450
I am launching a Maine Coon cat breeding business and need a logo. The Maine Coon is the largest cat breed, with a very
223
entries
57
diseñadores
We need a fun, amazing design for our dog treat business.
299 $US
We are a family owned company creating healthy dog treats for pup loving owners.
136
entries
37
designer graphistes
Pet product brand needs a minimalistic Logo (dog products)
€ 269
We are selling pet products for dogs. Our brand does not stand for a small cute and playful puppy but for a proud, magni
758
entries
133
designers
Modern veterinary company focusing in treating animal pain is looking for a cracking logo
AUD 669
We provide pain relief to dogs and cats in the area of Sydney, but we will be expanding (so we are not geographically ti
246
entries
55
diseñadores
Dog grooming business logo change (want to capture fun, cute and chilled out)
AU$ 399
Dog grooming business. Currently using a vistaprint template logo and want to upgrade to our own before things grow any
81
entries
9
Designer